If you use Twitter or TikTok, you might have recently seen a student loan TikTok go viral.

In the video, a dark-haired woman* tells us that she just checked up on her student loans  — and is shook by her account details. According to her, she:

THIS IS A CRIME!

It sounds wild and unbelievable. At face value, the numbers just don’t match up. It doesn’t make sense!

Is that student loan TikTok for real?

I’ve spent the past four years writing about student loans and have heard plenty of student loan horror stories that are all too real.

“Student loans are really messed up,” the woman in the student loan TikTok says. “$120,000,” she ends in a whisper. “What are you supposed to do with it.”

I’ll use the numbers she provides as a starting point to illustrate what this kind of student debt could look like in real life — and see if it’s really possible for it to add up that fast. Let’s dive in.

Disclaimer: I obviously don’t know the woman in the student loan TikTok’s repayment history, and what resulted in her specific situation. Anything from here on out is purely speculation, which I’m using to illustrate the costs that can come with these types of student loans. This analysis does not serve as financial advice, either — please consult your own financial professional for help with your specific situation.

Repaying $80,000 in student loans on a standard 10-year repayment plan

I’m not sure what kinds of loans this TikToker had and I didn’t want to speculate on her situation too much. But I know enough about student loans to make some educated guesses at what possibly could lead to a situation like hers.

I’ll base my calculations on a hypothetical borrower, let’s call her Heidi, who’s starting to repay her federal student loans in 2010 with a balance of $80,000. The original TikToker has #attorney in her profile, so based on that I’m going to say that Hypothetical Heidi also incurred her student debt from three years of law school.

Our hypothetical Heidi has the following breakdown in federal student loans, as of when repayment begins:

The combined $80,000 debt has a weighted average interest rate of 7.35%. (The original TikToker estimated onscreen that her interest rate was 7%).

Now, the standard repayment plan that borrowers are defaulted to is a 10-year plan, with fixed monthly payments designed to pay off the principal and interest after 10 years. If Heidi were to follow this plan, here’s what her repayment would look like:

Already, the total Heidi’s repaid over 10 years is pretty close to the $120,000 figure the original TikToker has paid to date. And this high total repaid is due in large part to the higher student loan rates charged on undergrad student loans before 2013.

Those numbers are wild enough. But as you can see, Heidi has paid $113,000 off, yes — but then the debt is gone. Even so, how is it that Heidi, who followed the 10-year repayment schedule, wound up paying interest costs equal to 40% of her starting balance?

Student loans got a major overhaul from the 2012-13 to the 2013-14 school year, thanks to new legislation that updated how student loan rates were set.

Before this bill, rates were fixed and didn’t adjust along with rates on other products. All direct subsidized and unsubsidized loans originated in 2012-13 or before (back to 2006) got a 6.8% rate, and PLUS Loans paid 7.9%.

In short: much of the reason our TikToker might have ended up with such high amounts repaid and still owed could be due to, well, having the bad luck to get stuck with higher interest rates. She happened to be a student before 2013, which meant she happened to take out student loans when rates were higher — and they’ll stay the same until the debt is paid off.

Repaying $80,000 in student debt on an income-driven repayment plan

The scenario above hinges on one big if: whether Heidi can afford to make her monthly $943 payments. Heidi got a six-figure job right off the bat as an associate at a private firm that meant she could afford to stick to the 10-year repayment plan. But most recent grads wouldn’t be able to swing it — that’s as much as more the average rent in 2010!

Heather borrowed the same amount as Heidi, but experienced some hiccups in repayment. First, she failed the bar exam the first time and had to retake it. By the time she’s a barred lawyer ready for work, a year has passed — with her loans in deferment and accruing interest that whole time.

With this interest added in, her new balance is just under $86,000, with monthly payments of $1,013 for a 10-year repayment. But while Heidi earned private-sector pay, Heather wants to work as a public attorney. She gets a job as a public prosecutor making $50,000 a year.

On this salary she can’t afford the minimum $1,013 a month as it’s almost a quarter of her monthly gross income.

So Heather signs up for an income-driven repayment plan, which bases monthly payments on her income rather than what she owes. As a result, she only pays $400 per month.**

Just one problem: these monthly payments are less than the $490 interest accruing each month. As a result, she accrues $1,080 per year in unpaid interest that is capitalized, or added to her balance, when her payments are annually readjusted.

This repeats for 10 years, with Heather earning raises along the way that average 6% per year — and her monthly payments increasing proportionally. Here’s a breakdown of her payments after 11 years:

Her 10 years as a public attorney qualify her for Public Service Loan Forgiveness (PSLF), and the remaining balance is forgiven. Phew! 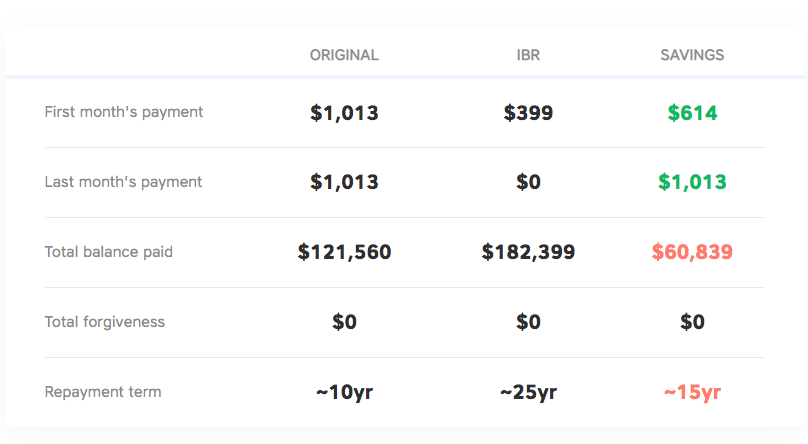 Wait a minute… this student loan TikTok doesn’t add up

This is the part where, if this were a video and not a blog post I stayed up until 3 am writing, you’d hear a record scratch. Because:

The numbers cited by the original TikToker just do not add up.

At this point I had to ask myself: How is it that Heather has paid just over half of the $120,000 TikToker says she paid on her student loans, but only owes $12,700 more?

I spent hours looking for a way to make it all add up as she said. I played with the numbers and tried almost every scenario I could imagine. But the more I looked at it, the less sense this student loan TikTok made.

The closest I got was this farfetched scenario (or something similar):

Hopefully you’re seeing what I’m seeing here: When that TikToker asks “HOW IS THIS POSSIBLE?” The answer is: It technically is possible? But it’s not, in my opinion, probable. At least, not unless this TikToker is omitting important details.

I wish it added up and made sense, I truly do. It would have saved me at least 2 hours spent screaming at spreadsheets and loan calculators, trying to make it make sense!

I saw a comment that mentioned something interesting: that the TikToker had posted a second video recording her screen with her student loan account pulled up and her loan amounts displayed.

this literally isn’t true, she posted this shortly after and tried to hide that she already paid off 80k of the principal. her original loan was closer to 160k…. pic.twitter.com/o0yDDTdBsX

Bottom line: she borrowed significantly more than she initially claimed — probably about 60-100% more. (It’s hard to say for sure, as it’s possible interest did accrue and capitalize along the way, that her amount borrowed is less than the combined $160,000 total of principal paid plus the remaining balance.)

The state of student loans is horrifying and need to change, yes — but be careful what you believe

I still don’t know exactly what to make of this student loan TikTok. Like hundreds of thousands of other people who watched it — I initially believed it. She seems so distraught, I thought she must be telling the truth.

And maybe she was. Or at least, what she thought was true.

As a personal finance journalist, however, I’m skeptical of claims like these. There have been many times when I’ve interviewed people to share their story and noticed that things didn’t add up. Hell, I’ve found mistakes and wonky figures in my own stories about my finances, too.

The truth is most people don’t know the nitty-gritty details of their debt or financial accounts. And even if they do, it’s easy to misunderstand, misread, misremember or misstate them. (I’m choosing to give this TikToker the benefit of the doubt with this one.)

Most of us have learned to take a second look at victorious, quick-win debt stories. Maybe we should take student debt tragedies and other finance horror stories with the same grain of salt.

There’s no need to exaggerate or overstate how burdensome student loans are. The reality is scary enough.

Yes, there is so much wrong with federal student loans. It’s messed up that rates can get above 5% for anyone. It’s messed up that once you’re locked into a rate you can’t change it later (without refinancing with a private lender, anyway). It’s wrong that unpaid interest accrues in deferment and forbearance, or even as you make payments on an IDR — and gets added to your principal so you owe more than you borrowed.

And that’s just federal student loans, which are typically more affordable and provide so many more protections and benefits than private student loans.

There’s no doubt that we need major comprehensive student loan reform in the U.S.

But what doesn’t help anyone is videos like these that overblow the case and steal attention from the real struggle that many face.

In closing, let me just suggest:

*I intentionally don’t mention this woman’s name or TikTok handle. Please do not send her any hate or nasty comments.
**For help with my calculations in this section, I assumed the Income-Based Repayment Plan and used this calculator.

Photo by Jp Valery via Unsplash

Blow Your Monthly Budget? Yep, Me Too — Here’s How I’m Salvaging It

Hello, I’m a Messy Bitch and This Is My Fuck Up Fund

Optimize for Lifestyle or Financial Success? How Dungeons & Dragons Taught Me to Do Both

February 18, 2020
Previous Post A Case for Grieving the Mundane Losses of a Pandemic
Next Post How Financial Advice Triggers Painful Money Shame

Stop fighting your money — and start fighting for yourself.

I'm Elyssa, a finance writer and proof that knowing better doesn’t mean doing better. See: my many failed attempts at following traditional financial advice. More than the “what” or “how” of money, financial health hinges on “who" we are with money. So let’s explore our financial selves. Get compassionately curious with me about the financial fears, beliefs, and behaviors that keep us stuck. Uncover daring dreams that motivate us to finally fix our finances. And gain insight and empowerment to ditch one-size-fits-all approaches to carve out your one-of-a-kind financial path.

Find it on Brave Saver